I remembered on our 27th trip through Do-It Center, scratched, sun-burned, and demoralized.  As we walked through the store, Davin pointed out a guy we had seen a couple of times previously.  He strode confidently through the store, work boots on, keys jangling on a carabiner clip, with a pencil tucked effortlessly behind his ear.  He exuded competence.  He knew where everything was in the store, and gave a small nod to many of the employees as he passed, a look of mutual respect shared between them.  "One day," Davin said, "you will be walking though this store just like that guy."

Fuck that guy.  After working four weeks on our roof, I am a man transformed.  When I get up in the morning, I put on the same outfit every day.  This is my new "uniform":

As I have been really missing my weekly Dungeons and Dragons game, I imagine getting ready to set out on an adventure.  First, I clip on my Carabiner of Lock Picking.  To begin my quest to become a competent working man, Davin gave me his carabiner for my keys. It was the first step down a long road, and using it reminds me of our early hilarious days here.  Next I belt on my Leatherman of Many Things.  On a trip to Chicago, Tim V. asked me to pick him up a Leatherman.  "You should get one for yourself, you're going to need it," was his advice.  Now I can cut, screw, or bend anything that comes my way.  For my feet, I lace up my +2 Boots of Stability.  These were purchased shortly after my ankle injury, and are great for roof climbing, as well as steel-toed ass-kicking, when necessary.  My +1 Knee Pads of Protection provide immunity from hidden nails and screws which may cross my path.  Next comes my Banyan Inn T-shirt, so when I stroll through Do-It Center, they know who the fuck they're dealing with.  My outfit is topped with my Headband of Sweat Absorption and Helmet of Sun Protection.  Behind my ear is tucked my Pencil of Marking.  My Gauntlets of Gripping, however, are in need of replacement: 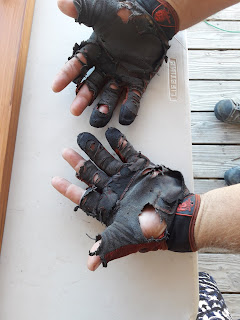 As an aside, in a recent trip to Chicago, my doctor diagnosed me with bilateral carpel tunnel syndrome, which makes me believe that my Gauntlets of Gripping might actually be Cursed Gauntlets of Weakness, a matter I will be taking up with my local cleric.

After I buckle up my Belt of Holding, containing my +2 Hammer of Smashing, Screw Gun of Speed, Chalk Line of Accuracy, and Wand of Electricity Detection, I am ready for action.  Once, after taking off my belt and knee pads, I marched through Do-It Center for some nails.  As I passed employees and fellow builders, we exchanged the knowing nods of respect I had seen with Davin.  Davin the Seer had indeed been right.

Thus begins my daily adventure with the roof.  My task was to remove the old metal roof, sheath the entire roof in plywood, and install a water barrier to the entire roof.  The task was indeed daunting: 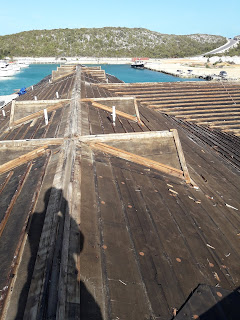 As with any great adventure, there were surprises along the way.  One day, as I was removing the old metal roof, I found the cornerstone left by one of the previous roofers, a truly magical find: 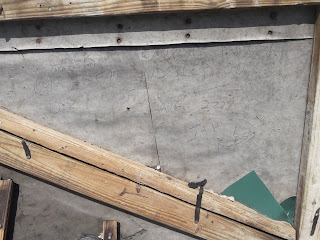 It is hard to see, but scrawled in pencil on the roofing paper of one of the dormers was "CHUCK (aka CHUCKER) . . . SWEAT AND BLED ON DIS ROOF AUG 2002  JAH BLESS."  Yes, Chucker was speaking to me over the span of time.  I was like, "I hear you Chucker.  I have also sweat and bled on dis roof."  I felt a bond with Chucker that only fellow working men can share.  I imagined Chucker, having almost completed the roof, setting his cornerstone with pride and hope.

Chucker got me thinking about building things and about accomplishments in life in general.  His cornerstone reminded me that whatever work we may do in this life is usually built on the work of those who came before.  I was sheathing the roof that Chucker built in 2002.  Whatever pride or sense of accomplishment I had in finishing the roof necessarily needed to include the recognition of what Chucker did before me.  The same could be said for many of our successes- that we could not have done it without friends, parents, grandparents, giving us the ability and chance to be successful.  The other thing that I was reminded of was whether it be God for me, or Jah for Chucker, or the Supreme Architect of the Universe for the Provincial Grand Chaplain of the Masonic Order in Munster, we need to realize that although hard work and perseverance may help us achieve things, we should never forget that the Universe helps us along the way in ways we might not even see, and remembering to ask for blessings or give thanks is equally important.

Since Chucker's cornerstone was on a part of the roof that was being removed, I reverently cut out the cornerstone and re-laid Chucker's cornerstone next to mine.  Amy and I left our mark, in homage to Chucker, in pencil on the plywood.  Amy left "To the Success of the Banyan - Amy Schwartz  2018."  Mine was "Dear Hurricanes, Please Leave Me Alone.  Love, Roof.  RWS Aug. 2018  JAH BLESS."  We felt Chucker would be proud. 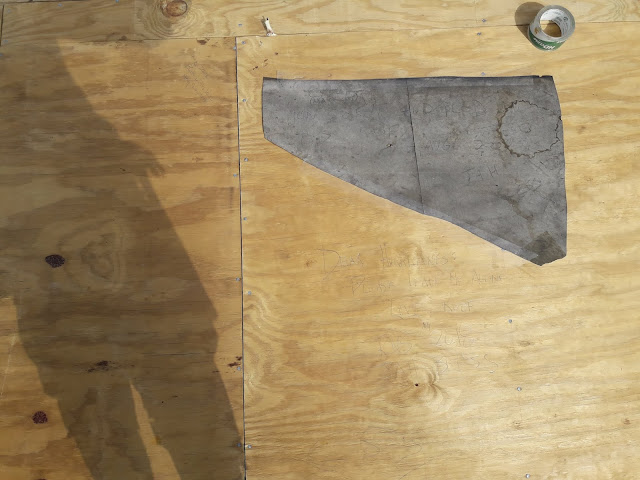 Speaking of working men (and women), Amy's dad came to town.  Amy's dad Randy had come down once before when he brought Otto down from the U.S.  On that trip, he stayed exactly one night.  On this trip, we thought he would want to relax a little on the island.  However, when Amy asked him what he wanted to do on his vacation, he replied, "build some furniture."  Thus, the furniture-making department of Banyan Inn, Inc., was formed. 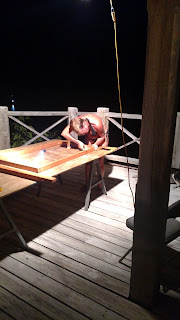 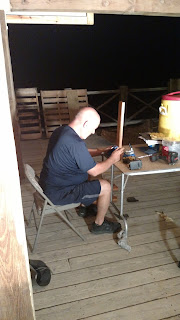 As Amy's design for the furniture required a pocket jig, unavailable on the island, Randy had brought down not only the required pocket jig, but also pocket screws and a new drill for Amy.  Both were excited to try the new tools and hone their skills.

For two days and nights the newly-formed furniture-making department went to work, cutting, planning, screwing, and varnishing the prototype of the pool-side chaise lounges.  And, while the prototype is still a work in progress, the discoveries and experiments done by Randy and Amy will form the backbone of the furniture-making knowledge of our production department.

So know this, future Banyan Inn guests, while we may crow about our accomplishments in building this place, we will always remember those who helped us get here, whether they be roofers of old, parents lending a helping hand, or the Supreme Architect of the Universe.  Jah Bless.