May 08, 2017
"It is easier to destroy than create." - Larry Niven, Noted Science Fiction Writer

Mr. Niven can suck it.  Obviously, he has never engaged in the thankless task of demolition.  Yes, the awards and accolades usually go to those artisans who begin with a clean slate and create something marvelous.  However, behind every Eiffel Tower or Statute of Liberty, there were the poor shlubs who cleared out the ground and demolished whatever was on the land beforehand.  It was in those ranks of unsung heroes that Davin and I found ourselves next.

In the room which ultimately will be the bar/rec room, we found ourselves facing some extensive water damage from a leaky roof.  We needed to see where the water was coming from. We needed to tear down the existing ceiling fans and drywall.  In short, we needed crowbars. 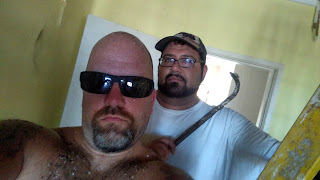 Now, the crowbar is about a simple tool as you can get- a six-pound piece of iron, crafted for smashing, pulling, yanking, and pretty much any destructive type of activity.  It is a distinctly male weapon: there is no subtlety, no finesse.  There is simply a man, a solid piece of metal, and that man's willpower to enact change in the physical world around him.  We found two on the property, giving us each the opportunity to rip the shit out of anything we could find.

We began in earnest. 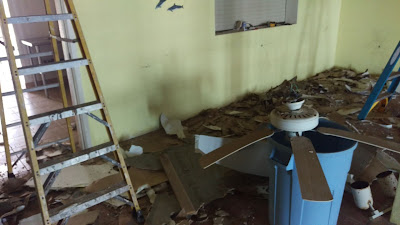 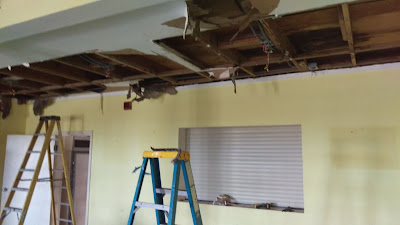 Now, here is the thing about demo, and the thing that leads me to believe that Mr. Niven has never swung crowbar before: When DaVinci painted the Mona Lisa, there was probably no risk that he would poke his brush through the canvas and something, shall we say, unexpected, would come pouring out of the canvas.  Not so with demo.  With each swing of our mighty crowbars, we unearthed the various surprises that only a 30-year-old tropical building could provide.  What's that rank liquid that splashed on your lips?  What are those chicken-wing-sized things scurrying out the hole you just made?  Lets just say we had a lot of questions that we purposely left unanswered.  In the end however, we completed our demo, found the leak in the ceiling, and were ready to move on.

The mighty crowbar had become our favorite tool...

Until we were introduced to the machete. 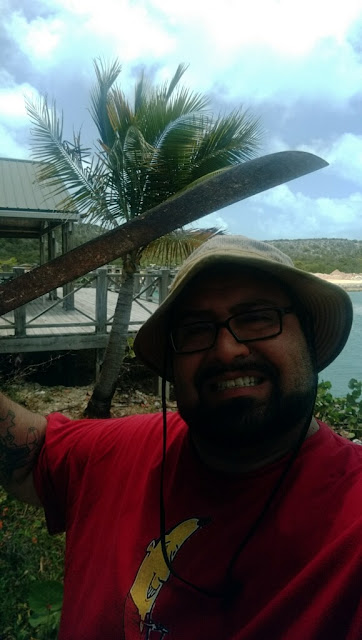 The machete is the go-to tool of every gardener in the Caribbean.  It is also, however, the coolest and most versatile tool now in our arsenal.  Think of any task, and we can find a way that the machete will accomplish that task.  Need some trees chopped down?  Done.  Need your back scratched?  Done.  Need some peanut butter on that sandwich?  Done.  Need to take the head of your enemy in mortal combat?  Done.  (Well, we didn't necessarily use our machete for all of these, but I'm just saying you could.)  Since, again, neither Davin nor I had ever swung a machete in our lives, we used our neighbor's grinding wheel to make sure it was extra sharp. 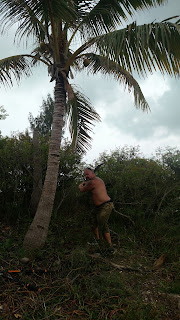 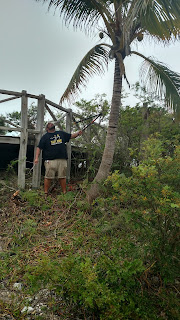 On the property there was approximately a half acre of overgrowth.  As the property sat vacant for many years, what started as small bushes became good-sized trees- think 3-5" diameter.  We have several beautiful palm trees on the property, and our task was to remove all of the surrounding garbage trees, clearing the view from our pool deck and dining patio. (At Lionfish Hotel, we take your ocean views seriously.)

Let me tell you, chopping stuff with a machete is both calming and exhilarating- The feel of the blade in your hand; the whistle of the blade as you swing towards your target; and the satisfying "thunk" as the blade cleaves your target.  You could see yourself doing it all day, your pendulum-like swings quickly turning an overgrown forest into a beautifully-manicured yard.

However, the machete is also a cruel mistress.  After about 10 minutes of hacking, we found ourselves sweating like a one-legged man in an ass-kicking contest.  I'm not talking running a 5K sweating.  I'm not talking about 30 minutes in a sauna sweating.  I'm talking about the bottom of your shorts dripping with sweat, having been completely saturated in the first eight minutes of chopping.

Nevertheless, we persisted.  Our work was happily interrupted by one of the dive shop operators next door, a local Dominican named Jack (who goes by "Jack Sparrow"), who also happened to be a former gardener.  He calmly took the machete from our weary hands, and proceeded to chop down in about 15 minutes the same amount of trees on which we had spent three hours.  He did so without breaking a sweat, and took down trees in three swings which had taken us 12-15 chops.  In addition to our enthusiasm, we now had actual training in using our machete.

At the end of the day, our swinging arms were weary, blisters were forming, and we were covered in bug bites.  (Our zeal to use the machete made us forget to use bug spray before we entered the bush.)  We have covered about a third of the ground we needed to clear, but with our newfound technique learned from Jack, our future looks bright.

It is with a broken heart that I write that Otto died yesterday.  Through my tears, as I held him in my arms and felt his tiny heart beat for the last time, I promised myself that I would write him a fitting epitaph.  This is my effort.

We went back to the pet store the next day and Otto was still there.  When I met him in the sea of other puppies at the store, he was the only one that wasn't barking.  Instead, he calmly c…
Read more

And another thing, do you know the absolute shittiest KIND of painting you can do?  Let me tell you.  Painting white paint on an already white wall.  Once the drywall finishers were done with the walls, the walls were white.  Then, I had to paint THREE coats o…
Read more

I get up at seven yeah, I go to work at nine; Got no time for livin' yes, I'm working all the time." - Neal Peart

I remembered on our 27th trip through Do-It Center, scratched, sun-burned, and demoralized.  As we walked through the store, Davin pointed out a guy we had seen a couple of times previously.  He strode confidently through the store, work boots on, keys jangling on a carabiner clip, with a pencil tucked effortlessly behind his ear.  He exuded competence.  He…
Read more