My friend Jodi stopped by during this haze.  I pulled myself out of the near-vegetative state I was in.  As she came into focus, I raged to her about having to paint white on white, and finally asked the only question that mattered to me at the time: "What fucking difference does it make?!!"  So she says, "you have to be careful on the last layer about your brushstrokes."  I'm like, "what the fuck?"  She says, "you see how you can see where the paintbrush left a mark?  People notice stuff like that."  And I think to myself, "what kind of motherfucker would ever notice something so insignificant?"  I'm thinking, "I don't think I'd like a guy like that."  He would probably be the same guy that would say "turn the music down," "put on some pants," "maybe you shouldn't have another beer."  I want to hang out with the guy that walks in and says "nice white wall, where's the whiskey?"  Nevertheless, I endeavored to make my brushstrokes neat.

Anyway, I fell back into the pseudo-coma of painting.  This is when I thought of Michelangelo painting the Sistine Chapel.  Imagine this guy, laying on his back, paintbrush in hand, and just thinking, "maybe I'll put another cherub here," or "I'm making great progress painting God's hand," or "should I put St. Peter or St. Paul here?" You know, actually painting something.  I'm like, "do you know how easy it would be to paint if you were actually painting something?  That would be some interesting and fulfilling shit."  So  I'm like, "you know what?  That guy was a pussy."  You want to impress me Mike?  Show me the entire Sistine Chapel painted in three coats of FUCKING WHITE PAINT, with no drips, no buildup, and NO BRUSHSTROKES!!  Then, and only then, can you call yourself a "master."

I emerged from the haze to do something I love doing- making furniture.  We had some starts and stops when it came to starting the furniture production of the Banyan Inn, but the time had come to really, truly, make every stich of furniture in these rooms.  Amy and local heroes Jerome, Jessie, and James, as well as international superstars Bob, Pat, and Kelsey, descended on the Banyan Inn and worked in earnest.  Many were the days where miter saws and sanders would echo around the Inn and the smell of drying stain and polyurethane soaked the night.  The operation was massive.  But in the end, we had done it.

Here, without fanfare, are some of the pieces: 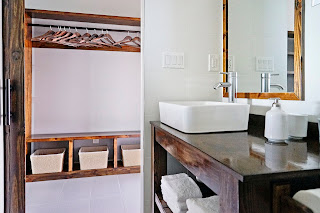 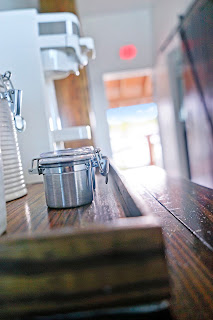 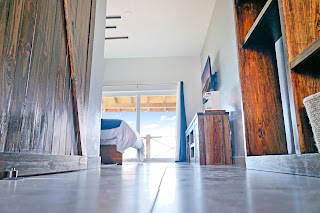 The three pieces I designed, the desk, the closet, and the teapoy, were obviously my favorites.  I got to ask great questions, like "what is the optimal height of a desk?" and "how can I make this so someone can sit on it?" and "why can't trees just grow in straight lines?"  I enjoyed answering all of those questions.  Objects of true creation, making them filled my soul in the same way that painting white on white sucked it dry.  It was a wonderful five or six weeks, and along the way, I came to my second revelation regarding a Renaissance artist that I had in a month.

In making my teapoy, I had the opportunity to use the Pythagorean Theorem.  Yep, a²+b²=c², one of the formulas in algebra when you said: "When the fuck am I ever going to use this in my life, ever?"  Well children, the answer is: "When you are designing an epic teapoy for use in your inn's showers."  What is a teapoy you ask?  A teapoy is a three-legged table.  We needed one in the shower to hold our complementary shampoo, conditioner, and body wash, along with luxurious bath towels.  (Look at me- product placement- corporate AF.)  I made the tepoy triangular so as to maximize table space while at the same time maintaining the spaciousness of the walk-in shower.  Thus, my need for the Pythagorean Theorem.  In any event, behold the Banyan Inn teapoy: 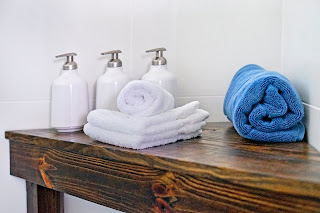 As I thought about the Pythagorean Theorem, I started to think about great thinkers of old.  Over the days, I started thinking of Leonardo Da Vinci.  Imagine being that guy.  Just sitting around, thinking, "what do you want to do today?  Maybe invent a helicopter?  I don't know, maybe paint what will be the most famous painting in the world?"  I mean the guy was hands-down the smartest motherfucker to ever live.  The sheer amount of topics on which he was a master, from art to science to invention, made say to myself, "I bet that motherfucker wasn't married."  I didn't know at the time, but a quick Google search later revealed that yes, Leonardo Da Vinci was the smartest motherfucker to ever live.

Here's how I knew Da Vinci was never married.  I could imagine the exchanges:  Leonardo: "Where are my brushes?"  Wife: "I put them away."  Leonardo: "But I was using them."  Wife: "I know but you should have put them away."  Leonardo: "Where are they?"  Wife: "I'm not telling you until you learn how to put away your brushes when you are done."  Leonardo: "But they are MY brushes."  Wife: "No they're not.  They're OUR brushes, and until you learn how to take care of OUR brushes, I'm not telling."  Or, just as Da Vinci was putting the last stroke on the Mona Lisa, bringing to creation one of the most famous paintings in the world, a sublime moment when Da Vinci said, "it is complete, and it is fucking awesome."  That moment when the world had received a gift of genius.  And right at that moment, Mrs. Da Vinci walks in and says "Nice picture, Leo.  I need three more for the other bathrooms."  I'm not sure Da Vinci would have been as prolific under those circumstances.

Now at this point you would be right in asking: Randy, are you really comparing yourself to Michelangelo and Da Vinci?  Yes.  Yes I am.  (At this point it's a good time to add that Jesus was also a carpenter.)  I don't think there is harm in that.  Because I believe that in any endeavor, pick your masters wisely and aim high, and although you may not ever reach the top, at least you will forever be striving to get better every day.

So know this, Banyan Inn guests:  Our walls are fucking WHITE, and if you see some brushstrokes it means that it was painted by human beings.  Those same human beings made every piece of furniture in your room, and I hope that they radiate the soul-filling love and happiness I received in making them.