March 23, 2018
"The building art is, in reality, always the spatial execution of spiritual decisions. It is bound to its times and manifests itself only in addressing vital tasks with the means of its times. A knowledge of the times, its tasks, and its means is the necessary precondition of work in the building art." - Ludwig Mies van der Rohe

Mies, a former Chicagoan like myself, knew a thing or two about building.  My knowledge of the times was that the Banyan Inn needed a kick-ass pool deck, stat.  The task of said deck is to provide maximum entertainment for our guests.  The means to accomplish this deck were (1) me, (2) my tools, and (3) moving 20,000 pounds of lumber.  I was going to engage in the building art.  I was going to make Mies proud.

In addition, as some of you know, decks are kind of my thing.  Having built a deck or two, I consider myself an at least average deck builder, with the occasional lapse into a good deck builder.  The bottom line is I love building decks.  It was with great trepidation, therefore, that I boldly set out to build THE BIGGEST DECK OF MY LIFE.

For those of you unfamiliar with the Banyan Inn pool deck, it (was and) is 2,000 square feet of elevated, pressure treated lumber, surrounding a 50,000 gallon pool.  It survived almost 25 years of hurricanes, until sadly Hurricane Irma, the biggest hurricane in the history of the Caribbean, dealt the coup de gras.  I was determined to bring this beauty back to life.

The first step of the re-build was removing the parts of the deck damaged by the hurricane.  Sadly, this amounted to about 90% of the deck.  The thing about decks is that they are: (1) heavy, and (2) fastened well.  This deck was no exception.  Thus, the demolition was carried out with: (1) crowbars, (2) Sawzalls, (3) metal grinders, and (4) tearing out and moving about 20,000 pounds of wood. 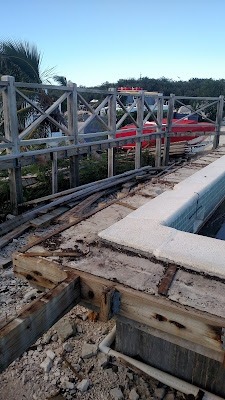 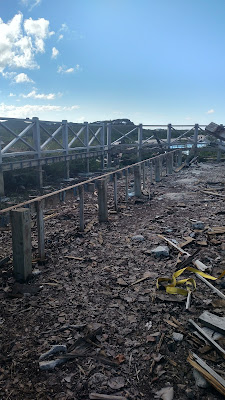 After removing 10,000 pounds of lumber, we had completed the demo work.  I set up my shop. 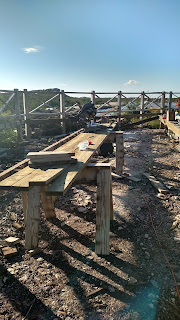 So now is the time I have to explain the story of the Banyan Inn deck screws.  Of course, since I'm a "at least average deck builder, with the occasional lapse into a good deck builder," blah blah blah <cough><cough>, I had the task of ordering the deck screws.  I began by "calculating" the amount of screws I would need per square foot of the deck.  By my "calculations," I figured I would need about 2,000 screws for the deck.  I went on line to order the screws, and it turns out they come in cases of 1,750 screws.  (Of course now is the time to note that I completely missed the part of the screw case description that said "Covers 500 square feet of deck.")  Anyway, I order three cases (5,250) of screws, thinking "even if I really fucked up on my calculations, I'm doubling what I think I need."  Three cases of screws arrive shortly thereafter, and I began the construction.

Around this time, the Schwartzes came to town.  Three beloved cousins, John, Tevi, and Anne, along with their better halves, Brenda, Han, and Scott, and their children, arrived on the island to celebrate New Years Eve and John's 50th birthday.  These were three of the very few people that have known me, and I them, our whole lives.  We literally grew up together, spending holidays, vacations, and time at our grandparents' farm.  We hadn't all been together for a long time, and it was a time to catch up, reminisce, and have a great time.  We did all that.  We named it the Schwartzpacalypse.

Of course in our reminiscing the subject of our Grandpa and Grandma Schwartz came up.  As you know, my Grandpa and Grandma were the gold standard.  This opinion is obviously shared by my cousins.  On New Years Day, early in the morning or late the night before, my cousin John and I, around the time the bottle of Jack Daniels went empty, were talking about our Grandpa.  We talked about how Grandpa built the farm, how hard the work would have been, and how we thought he would think it was cool building the Banyan Inn deck.  It was at this point that John asks, "What are you doing about a cornerstone?"

A cornerstone is, essentially, the most important part of  a building.  Cornerstones were, generally, a stone set in an important place inside a building, which commemorated the building's construction.  Sometimes, the cornerstone was set with offerings of grain, wine, and oil.  Often, prayers were offered, and religious or community leaders presided over the laying of the cornerstone.  According to Wikipedia: "Over time a cornerstone became a ceremonial masonry stone, or replica, set in a prominent location on the outside of a building, with an inscription on the stone indicating the construction dates of the building and the names of architect, builder,and other significant individuals.  The rite of laying a cornerstone is an important cultural component of eastern architecture and metaphorically in sacred architecture generally."

Obviously, cornerstones are important in Freemasonry.  In my research, my favorite find was the prayer that the Freemasons prayed over their cornerstones: "The Provincial Grand Chaplain of the Masonic Order in Munster then read the following prayer: "May the Great Architect of the universe enable us as successfully to carry out and finish this work.  May He protect the workmen from danger and accident, and long preserve the structure from decay; and may He grant us all our needed supply, the corn of nourishment, the wine of refreshment, and the oil of joy.  Amen."

John and I talked into the night, and when he left the island, I assured him I would handle the cornerstone.  So, without further ado, I give you the cornerstone of the Banyan Inn Deck: 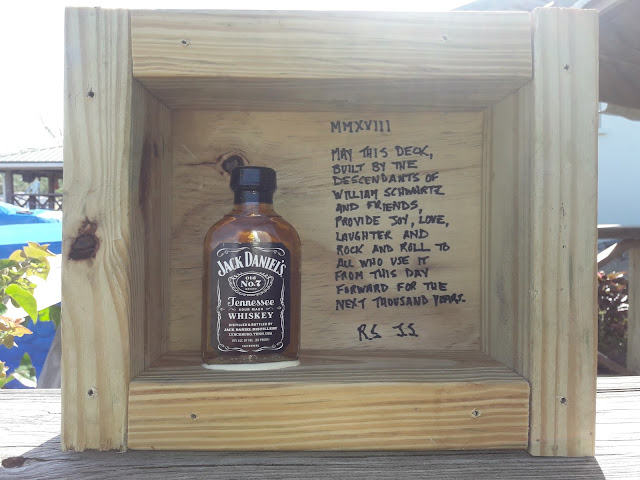 The inscription reads: "MMXVIII  May this deck, built by the descendants of William Schwartz and friends, provide joy, love, laughter and rock and roll to all who use it from this day forward for the next thousand years. R.S. J.S."  Yes, that is the tiny bottle of Jack Daniels that my cousin brought for exactly this purpose.

As I set the cornerstone, I said my prayer.  Though not nearly as good as The Provincial Grand Chaplain of the Masonic Order in Munster's prayer, I wanted to hit all the bases.  I prayed that the inscription on the cornerstone would be true; I prayed that the Banyan Inn succeed; I prayed Mies would approve of my building art; and I was proud to be my Grandpa's grandson.  I cried because he wasn't there to see this, but I laughed because I knew he was looking down, laughing, because locking up good Jack Daniels for 1,000 years was ridiculous. 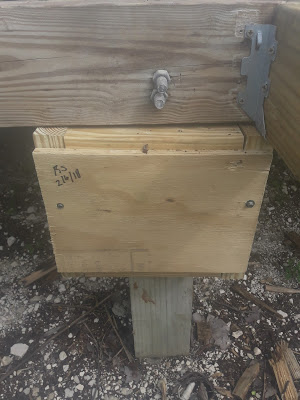 So after the cousins left, I continued with the deck building.  However, it became clear that the 5,250 screws I had ordered, and installed, were far short.

So of course, I went and "calculated" how many more screws I needed, and I thought, "maybe 1,000."  Amy's brother Andy then delivered four boxes of 350 screws.  Suffice it to say, after 6,650 screws have been installed in this deck, I now know that although I am a serviceable carpenter, I am a shitty estimator. 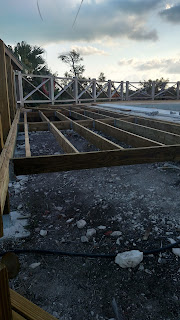 As of right now, I think I need about another 1,500 screws.  I have ordered ten 1,750-screw cases of screws.  I will give you a final screw count upon completion.

So know this, future Banyan Inn pool deck users, the beautiful deck you are enjoying has been consecrated in accordance with all rites of the cornerstone.  It has been given the life-blood of Jack Daniels and the spirit of the Schwartzes.  You have been tasked with joy, love, laughter and rock and roll while you are here.  Make us proud.